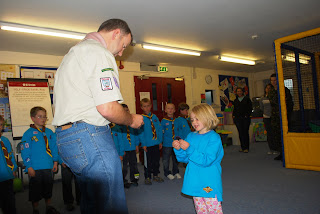 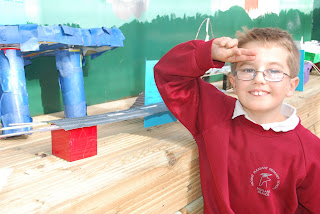 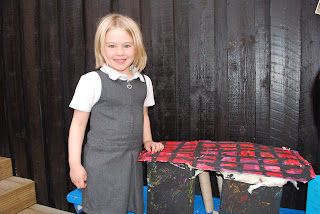 Hi
Abi became a Beaver. This is a bit early due to the fact that Beavers is finishing here at Easter as there is no qualified leader. A shame but Jacob and Abi have really enjoyed it while it has lasted. So Abi is now a proper Beaver for 2 weeks! I am now busy sewing on her badges for the final meeting this coming week. Hoping they can both carry it on wherever we go next. Jacob would be due to go to cubs in Nov when he turns 8.
There was a technology challenge at school this week. The task set was to build a bridge that would span a 60cm gap. They researched different ideas and we could help out too. Jacob was a good boy and listened to our ideas and made a very solid beam bridge. Abi however did exactly the opposite and went for the most junk modeling she could and then made it as bright as possible! They are being testing by an engineer this coming week and prizes will be awarded. We have also decorated eggs this weekend as there's an egg competition at school. I'll put photos of that on next week. Prizes are being awarded for that at the end of term assembly on Thursday.
We're due to go to Ascension on Friday, this is flight dependent as me and the children are indulging, hope we get on as a relax on the beach would be great. It has been unusually sunny and calm here for a week. We went to the beach yesterday and are about to walk to the cafe. Starting to sort out things to sell before we go. Still don't know where for certain, looks like UK for 3 months and then Belgium but there may be another posting coming up so we'll see. Having a problem getting a quarter for 3 months in the UK so no address yet and they won't sort out our stuff here until we get an address so it's going around in a circle at the moment. Hopefully we'll know more by my next post.
I finish at pre school on Thursday, someone did apply for my job so pre school can continue. I've enjoyed it but am ready to finish!
Hope all is well with everyone
Rachael.
Posted by Rachael at 9:27 PM 1 comment: 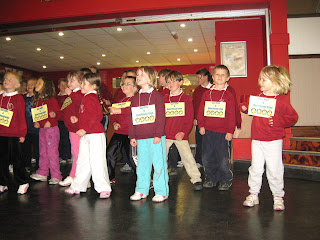 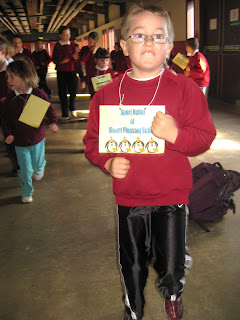 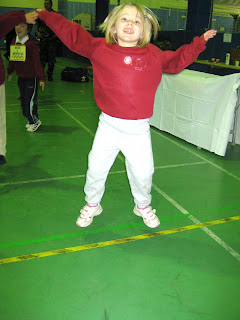 Hi
Yesterday Jacob and Abi took part in the mile for Sports Relief. At Mount Pleasant there is a corridor that is very long. From school to the reception area and back is a mile. So the whole school walked the corridor doing activities on the way I have included a photo of the group doing a dance, one of Jacob jogging on the spot and one of Abi doing star jumps. Not sure how much money they raised but it was fun for everyone.
We have found out we are not going to Shrivenham but now don't know where we will be posted to. Allen can have his knee operation in May but that will depend on his next job so we're still waiting!
Only 2 weeks left at pre school and then I will have to start packing. We haven't done anything yet so it's going to be a busy time, no change there then really! Went to a leaving meal for the Chief of Staff last night and am off to a ladies night on Monday. Have booked to go to Ascension over Easter for some beach time. Abi lost another tooth, she was play biting Jacob, as a dog, and he kneed her int he mouth. I took her to the dentist but he said it would come out naturally. It did 2 minutes later!
Better get outside as it's blue skies and lovely sunshine - just have to ignore the howling gale!
Rachael.
Posted by Rachael at 2:14 PM No comments: 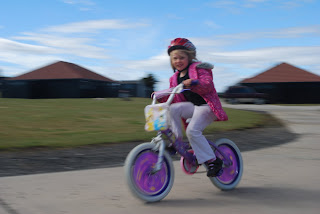 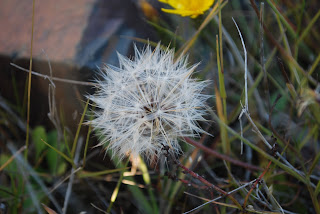 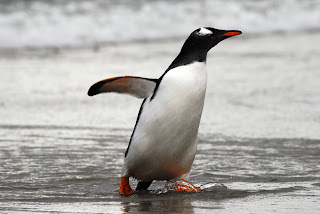 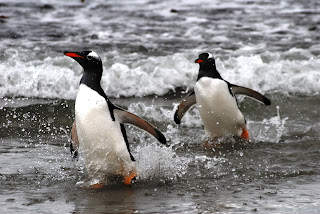 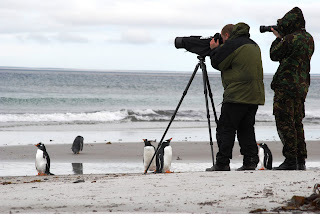 Hi
I went on a 6 hour classroom based photo course for my digital camera followed up with a 5 hour practical session at Bertha's beach. I thought I'd put on a few photos I was proud of. I took one of Abi on her bike. I was trying to get a movement shot, which I think I did! I then took a close up of a thistle type flower. The other photos are of a Gentoo penguin coming out of the water, you can even see the drops of water on it's chest and also 2 Gentoos running through the water. The other photographers were concentrating on taking pictures of the dolphins that were jumping and surfing the waves so I snapped one of them completely oblivious to the penguins that were virtually tapping them on the feet as if top say 'what about us!' The course was good as I now feel I can keep the camera off auto and actually change the f stops and light to take different types of pictures. Allen's doing the course next week so it'll be interesting if we get the same out of it, we'll see!
Rachael.
Posted by Rachael at 7:15 PM 4 comments: 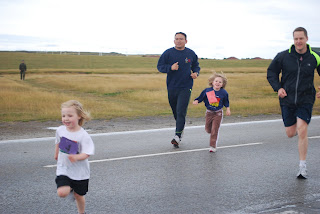 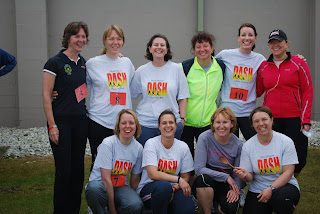 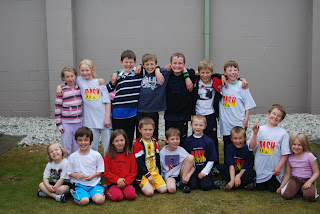 On Saturday the whole family took part in the MPA Dash, it's all done for charity - stress and penguins this year! It was a mile and a half run as a team of ten. I organised the children's team. They had 16 in theirs so we ran some of the children in pairs. Jacob ran his with his friend Joe and Abi ran with her friend Isabelle. Luckily neither of the children wanted me to run with them! Allen ran with the boys and Rob and PK ran with the girls. There are photos of both kids running. I had my kit on, just in case an extra was needed to run with the children. However the ladies team ended up one short and I had to run for them. I say run I actually ran walked. It was extremely hard, especially when you haven't been to the gym for a few months. I just about managed although the bacon roll before hand didn't help! So there's also a photo of the ladies team and one too of the children's.
Straight after the Dash I went off to practise my photography course skills down at Bertha's Beach with the other class members. The next post will have a few of those shots on it.
Rachael.
Posted by Rachael at 5:50 PM No comments:

Gaps, Kings and The York 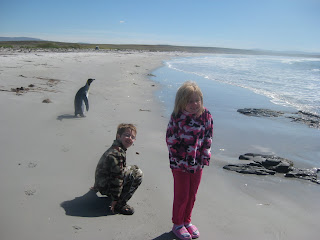 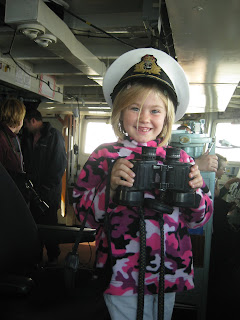 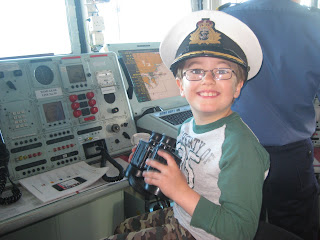 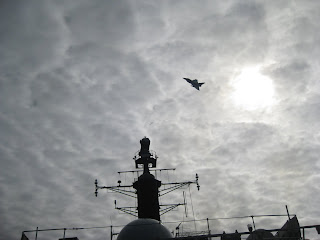 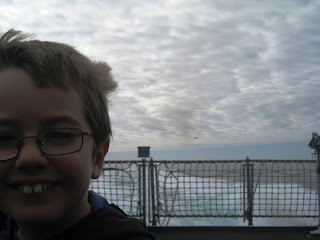 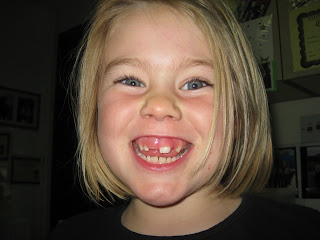 Been busy as usual so I thought I'd put a variety of photos on from the past couple of weeks. Jacob, Abi and myself went to Bertha's beach to try and swim with the dolphins. We all went in but the dolphins stayed just out of reach. We could see them but they wouldn't come close to us. It was also quite wavy and I could only hold onto one of the children at a time. Jacob gave up pretty quickly and then Abi had had enough too! I couldn't blame them as it was freezing in the water. When we started to walk back to the car there was a King Penguin in the way. You are meant to keep at least 5 metres away from them but this penguin was having none of it and wanted to come up to us. I've included a shot of J&A plus the penguin all posing for the photo!
This week Jacob, Abi and Allen went on HMS York. I couldn't go as I was working. It's the same type of ship that I went down to South Georgia on so I wanted the children to go and see what it was like. They had the morning off school and had a fun time. They each got to steer the ship. As you'll see in the photo the Captain doesn't actually steer the ship, there's a person next to him who takes direction from whoever is in charge on the bridge. A Typhoon also flew past so I've included one of the plane above the ship and one of Jacob with the Typhoon as a dot in the background - see if you can see it!!
Abi was a bit of a moaning so and so by the end of the trip, they'd shown off some guns which were noisy, she hadn't liked that part. So Allen, when they got home, pulled off her fleece quite roughly and it caught on her tooth and pulled it out. It was already wobbly! That put her in such a state that she wouldn't/couldn't go back to school in the afternoon! So I've added a gappy photo of Abi too.
I am on a photo course this week so next week's post should show if I've been listening. It seems quite complicated to me, a bit mathematical. I need to read the notes before tonight's session. We get to go to Bertha's Beach on Saturday to practice so that's good.
Should find out where we're off to on 18th March,
Rachael.
Posted by Rachael at 6:59 PM 1 comment: