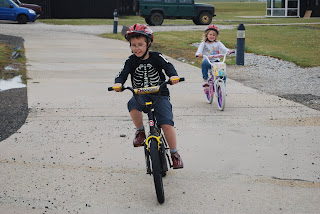 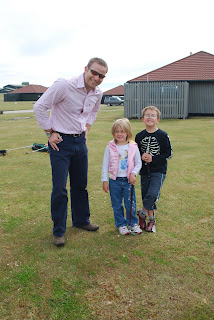 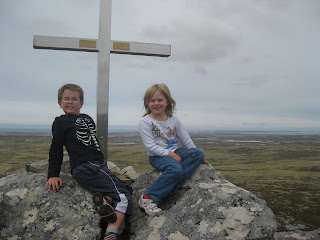 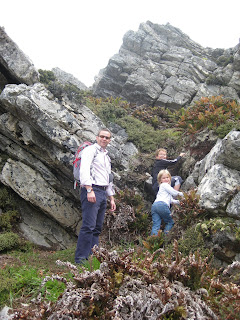 Hi
For once we had a quiet weekend. We skipped the Mess Happy Hour on Friday as Jacob and Abi had woken up at 5.30am so were pretty tired by 5pm! Instead we had a tasty tea and DVD together. Saturday is homework morning, then, as it was rubbish weather, I took them to see Where the Wild Things Are at the cinema. This is one of my favourite books, mainly due to the illustrations. The film was good but a little sad for me. Abi was a fidget bum and was on and off my lap for most of the film. They did enjoy it.
Jacob is now riding his bike with much more confidence so we decided to cycle to the Mess for a late breakfast on Sunday. I've included a photo of them both cycling around our circle. It was a calm day here on Sunday, very unusual, so we played some golf out the back of the house - another photo of that. Then we did a walk up Pleasant Peak. It's very close to the base. You may well see the base in the back of one of the photos. There are 2 memorials up there but we've only managed to get to one of them so far. So, on Sunday, we climbed to both. Quite steep drops in places but we were fine. Abi managed to sit in a very wet patch and Jacob's foot went in a really muddy bog bit but everyone enjoyed it. I felt like I'd worked off my cooked breakfast and Jacob and Abi loved the rock climbing. The rest of the day was spent playing outside, going on the bikes and playing at the park.
As I'm typing this it is throwing it down, probably a bit like the UK!
Hope all is well with everyone
Rachael.
Posted by Rachael at 6:20 PM No comments: 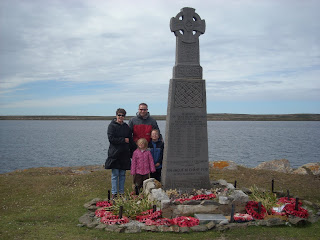 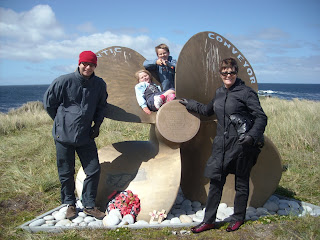 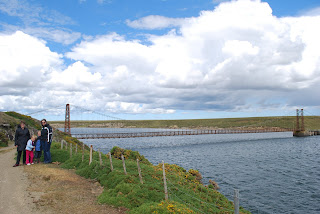 Hi
We've been out and about showing Marion things that she didn't see last time she was here. We went to Fitzroy, two ships were sunk here during the 1982 conflict so there are quite a few memorials to the sailors lost at sea. I've put in a photo of one of them. We spent quite a bit of time skimming stones on the beach as well as looking at all of the memorials.
We also had a night in Stanley. We stayed at the Hillside camp, it's an extension of our base here. It mainly has a bomb/weapon disposal section there that deals with old weapons that have been found around the Falklands. These date back to the first world war but a lot are from 1982. We had a tour of the things that they have found over the years and it was quite surprising. We also walked to the lighthouse. There's a memorial at the lighthouse for the Atlantic Conveyor. Another ship that was lost in 1982, it was a big loss as it was carrying supplies and helicopters. We had a very nice meal out in town but a disturbed nights sleep due to heavy rain and people having a party next door!
We also went to Darwin house for Smoko, coffee and cakes. It was rather tasty. After gobbling lots of cakes we went for a walk to the Brodie Creek Suspension Bridge. It's the most Southerly located suspension bridge in the world. I've included a photo of it, it is rather knackered and you can't go on it any more!
Put our red car up for sale and sold it easily so that's good. Took our 'new' Freelander off roading to the bridge and it managed easily.
The flights in and out of here are a bit all over the place due to the UK weather. It's 2 days late in at the moment. Hoping Marion's flight will still go ahead on Tuesday. School starts again Tuesday, holidays go way too quickly for me. The weather here has warmed up but it's been pretty showery.
Hope all is well with everyone
Rachael.
Posted by Rachael at 9:07 PM No comments: 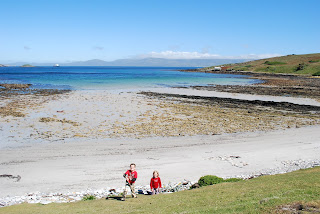 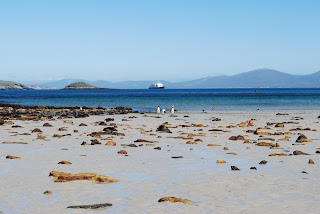 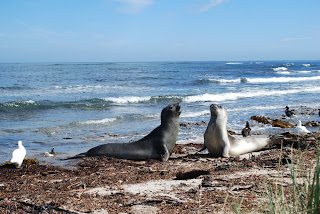 We have just returned from a 2 night away trip to Carcass Island. It takes about an hour and 5 mins to get there by helicopter. It's to the far west of the West Island of the Falklands (we live on the East Island). It's a beautiful island, similar to Pebble. The seas around it are so blue and green, truly breath taking. I could have easily sat and stared at the sea for most of the time, well that would be if I didn't have Jacob and Abi to sort out! We stayed in a fully catered lodge. The food was excellent so now the diet starts! We got there in time for afternoon tea and then went out to the closest beach, a 30 second walk. The first 2 photos are from that afternoon. There's a cruise ship in the distance, they were only there for the afternoon and we didn't see them our end. We had loads of Magellanic penguins around, 2 even lived in the lodge's garden. Six French people arrived on our first night, very noisy and got up at 5am to go out and take photos. They only stayed one night thankfully.
The next day, Rob, the owner, drove us to a beach 2 and a half miles away. It was full of magellanics, so full we weren't sure were to sit! We then walked back and spent the afternoon building sandcastles with moats and relaxing in the sun.
On Monday Rob dropped us at the far end of the island so we could see the elephant seals. The next photos are of 2 elephant seals, Jacob took the shot and then one of elephant seals and penguins. We walked quite a way along the coast and it was full of the huge seals, we had to be careful were we were walking so as not to tread on penguins or seals. We had a lovely break away. The weather was gorgeous and the food excellent.
Allen's got most of this week off so hoping to go into Stanley and visit a few places that Marion hasn't seen yet. I'm showing Lady Peach around pre school tomorrow, no kids in though as we're still on holiday so a bit of a waste of time really. Oh well it'll make me tidy it up I suppose!
Hope all's well
Rachael.
Posted by Rachael at 1:34 AM No comments: