Hi, we ventured to Jerash - North of Amman. Having read the guide book that we should either go at 10am or after 4pm we went for the latter. However it was still in the 40's so we did not explore it fully! It is a huge area of Roman and Greek structures, very impressive and loads more than we thought would be there. So I am looking forward to when Marion visits in November so I can go and see Jerash properly without 3 people moaning that it is too hot! 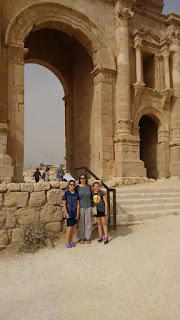 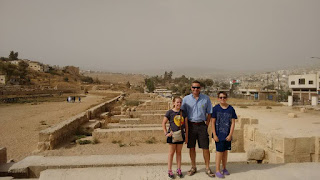 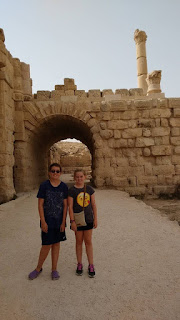 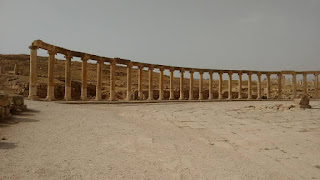 Posted by Rachael at 9:14 AM No comments:

Been a busy social week for us. We kicked off with a BBQ at the Ambassador's house on Sunday night. A strange day as the kids were invited but it was a school night. He lives in a house that looks a bit like a prison but we were in the gardens and they were beautiful. Food and drinks were good and the table we were at was fun too. Got to meet the rest of the military people out here. A couple of ladies that I had seen in the gym were there but they still ignored me! Didn't take any photos, sorry.

Last night was the Queen's longest reigning day so we were invited to the Brit Club where the Welsh Guards were marching and playing. It was excellent with some good curry accompaniments too. Did get a photo of this: 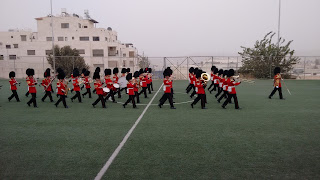 It was still a bit dusty so you can't see the proper background of Amman behind the band. Abi had gone to a go-karting party straight from school. She said it was excellent fun. She also tried out for a part in Mid-Summer Nights Dream and she got in, she's not sure which part but she thinks she's a fairy. 100 tried and 20 were picked so she is very pleased with herself. Abi has hit the ground running at their new school. Jacob is definitely being more laid back, he has made some friends, all other nations so far.
So tonight we are off to a Battle of Britain evening. Have got the cleaner to babysit and she is also cooking dinner for them so looking forward to a proper night out! This weekend we are hoping to go to Jerash, Jacob and Abi are in that house team at school so we thought it would be good to go and see what is there.
Posted by Rachael at 1:22 PM No comments:

So here's their first day photo. Will post again once they get home. Abi was so excited and was ready really early. Jacob was very laid back, his only concern was would they get homework today! Bus arrived at 7am and off they went. I think I was more worried than either of them and I am constantly checking my phone. I am off to the gym, then a swim and sun bathe. Am also going to have a drive around to try and get my bearings around Amman. 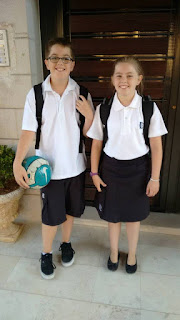 Posted by Rachael at 9:28 AM No comments: